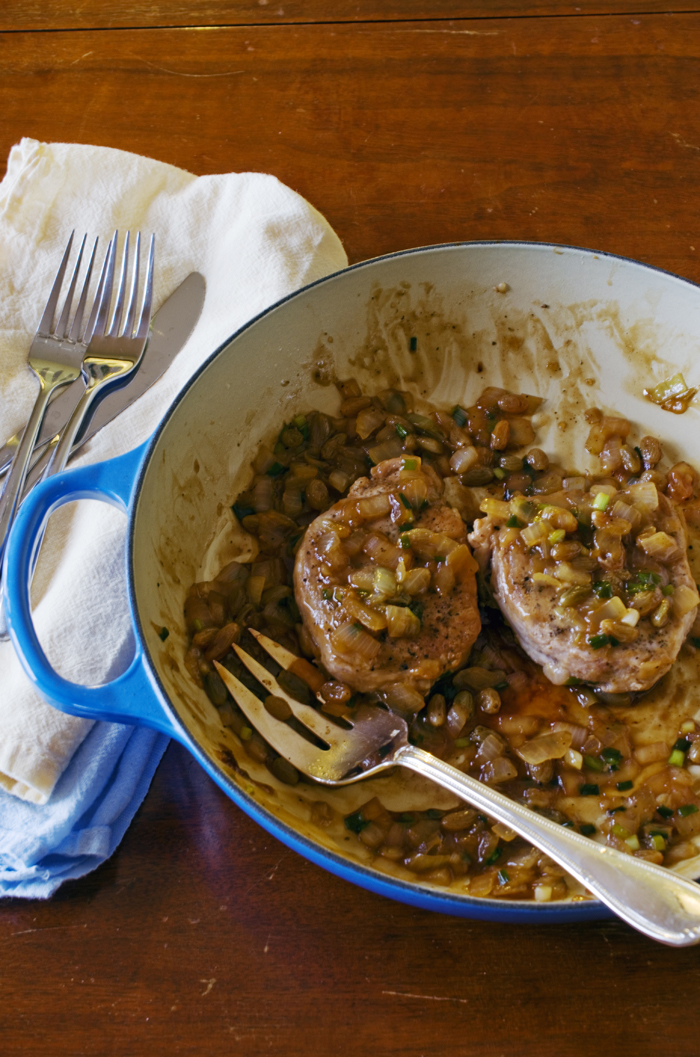 Boneless pork loin chops are one of the easiest humanely-raised dinner components I can get my hands on that require no defrosting and thus, no planning in advance. The butcher shop has boneless pork loin chops, the farmers’ market has them, and even one of my local hippie stores has them. Dorset Lemon Pork is a delicious way to fix boneless pork loin chops (which can sometimes be a bit “blah”) because it involves braising the chops keeping them moist and juicy instead of dry and tough. Plus, the lemon/raisin/Worcestershire sauce combo is like an English version of sweet and sour pork. Yummy! Plus, the entire dish can be finished in about 40 minutes.

If you’re especially pressed for time or if you just like cooking to be relaxing (I know I do!), the onion can be chopped in advance and refrigerated; the chicken stock, lemon juice, and Worcestershire sauce can be mixed together and set aside; the lemon zest, golden raisins/sultanas, and brown sugar can be mixed together and set aside; and the scallions/spring onions can be chopped and set aside. Just don’t leave the chopped onion in the refrigerator longer than a few hours. I once decided to chop up all the onions that I would need for the week and store them in plastic bags in the fridge. The next day, the entire refrigerator smelled of onions and it took quite a bit of baking soda to negate the stench!

Place a large skillet over medium-high heat and add the butter. When the butter has melted, add the onion and cook for 5 minutes. If the onion starts to brown, turn down the heat.

Next, season the pork chops with salt and pepper and sear them for a couple of minutes on each side. Add in the stock, lemon zest and juice, brown sugar, Worcestershire sauce and raisins. Bring to a boil and then simmer, partially covered, for 15 minutes.

Remove the lid, stir in the cornstarch mixture and the scallions. Bring back to a boil and cook another 5 minutes, stirring to make sure sauce doesn’t stick. Serve the raisin/onion mixture on top of the pork chops.