When Jenny (over at Silver Screen Suppers and the Vincentennial Cookblog) asked me to join in her Vincent Price cookalong, I said, “yes, please!” Those of you who follow me at The Past on a Plate know I love Vincent Price movies and recipes. Jenny actually handpicked a Vincent Price recipe for each participant from her vast collection of Price’s cookbooks. I feel like such a slacker for only having one!
The original recipe is called “Ayrshire Poacher’s Roll” and uses an entire roll of Ayrshire middle bacon* which is wrapped around a sweet/savory stuffing. It saddens me to say that no such thing is to be found in Wichita. The only bacon that I could find that wasn’t pre-sliced was a flitch of streaky bacon (or just “bacon” to Americans; there’s lots of different bacon in Britain). So, I did what had to be done and bought a package of Canadian bacon, which isn’t middle bacon but it’s at least back bacon which is a bit closer to the mark than streaky bacon would be. Since the Canadian bacon was already sliced, I simply put the stuffing in the bottom of the pan, topped with Canadian bacon and baked. It was amazingly delicious and quite simple. 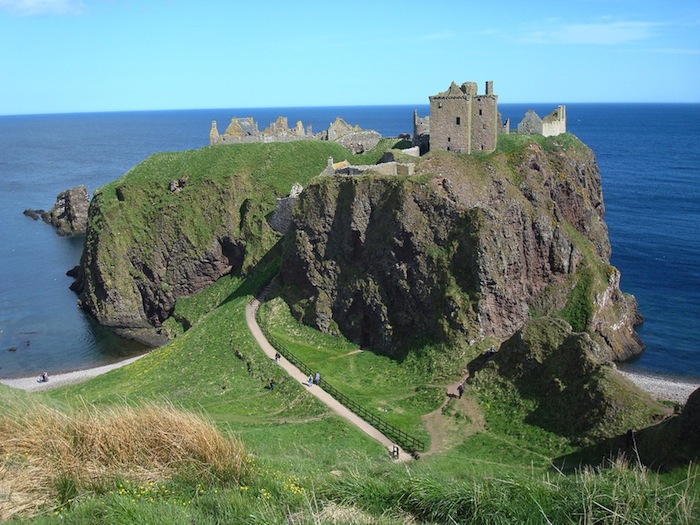 In the introduction to his recipe, Mr. Price tells his readers that the “poacher” in the title refers not to those who hunt illegally, but to those rebel Scots who were constantly “poaching” the king’s authority. Turns out I have at least one of those in my family, one shire over from Ayrshire in Dumfriesshire. Agnes Hairstanes (yes, there are all kinds of spelling variations) was imprisoned at Dunnottar Castle (photo above) in 1685 because she refused to acknowledge James II (VII in Scotland) just because he was a Catholic. (James might have been an inflexible ass, but I always feel rather sorry for him.) It appears as though Agnes must have eventually changed her mind so that she wouldn’t be shipped off to America. Honestly, Agnes doesn’t seem like much fun (what religious fanatics are?), but maybe a bit of Ayrshire Poacher would have made her lighten up a bit.

Preheat oven to 375˚F/190˚C/Gas Mark 5. Melt the butter in a saucepan over medium-high heat. When the butter starts to foam, add the chopped apples and onions, cooking until onions are translucent but apples are still firm. Turn down the heat if necessary to prevent browning. Season with salt and pepper. Set aside to cool for a bit. Grease a large cast-iron oval gratin (or other casserole) and set aside.

In a large mixing bowl, combine the breadcrumbs, mixed spice, parsley and raisins. Stir in the cooled sautéed onions and apples, then add the beaten egg and stir thoroughly. Spoon this mixture into the prepared pan and level off with a spatula. Arrange the Canadian bacon on top and bake 20 to 25 minutes, or until bacon is browned and stuffing is set.
Serves 4
Adapted from “Ayrshire Poacher’s Roll” in Vincent Price, Cooking Price-Wise (1971).
Print
*It’s on the top right in this photo: 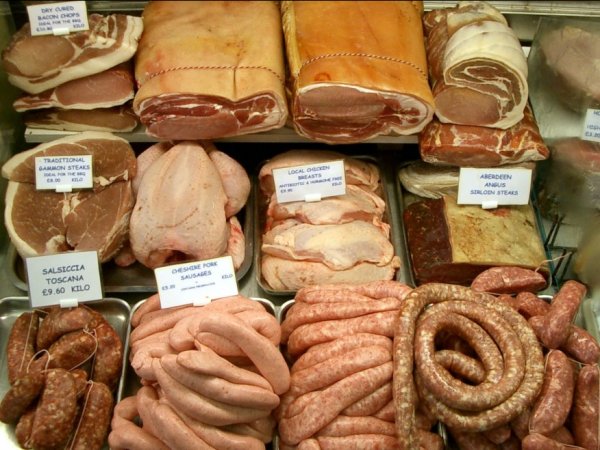