So we’ve just had Halloween, but there’s another holiday coming up on the 5th–Bonfire Night. (It’s also known as Guy Fawkes Day/Night and Gunpowder Treason Day.) On November 4th, 1605, Guy Fawkes was arrested while guarding the barrels of gunpowder he and his co-conspirators had planted under the House of Lords. The idea was to ignite the powder and get rid of James I (and a bunch of MPs while they were at it) who would be there the next day for the opening of Parliament. The conspirators were rounded up and November 5th became an annual day of thanksgiving. It was even celebrated in America as “Pope Day” until the American Revolution. Why “Pope Day”? The Gunpowder Plot conspirators were Catholic and wanted to assassinate Protestant King James (he of the Bible) and return England to Catholicism, so their defeat was celebrated by throwing effigies of Guy Fawkes and the Pope on a bonfire. Today, Guy Fawkes still gets tossed on the fire but there’s no pope-roasting. There are fireworks, though, which are much nicer, anyway.
A traditional Bonfire Night treat is Parkin, which originated in Yorkshire just like Guy Fawkes. The best way to describe it is gingerbread with oats. It’s spicy and sticky and perfect for this time of year. A note on the ingredients for Americans: I don’t have any trouble getting golden syrup in Kansas but black treacle is another story. I either have to order it online (shipping has gotten so expensive!) or bring it back from England. If you’re in a similar situation, use blackstrap molasses. 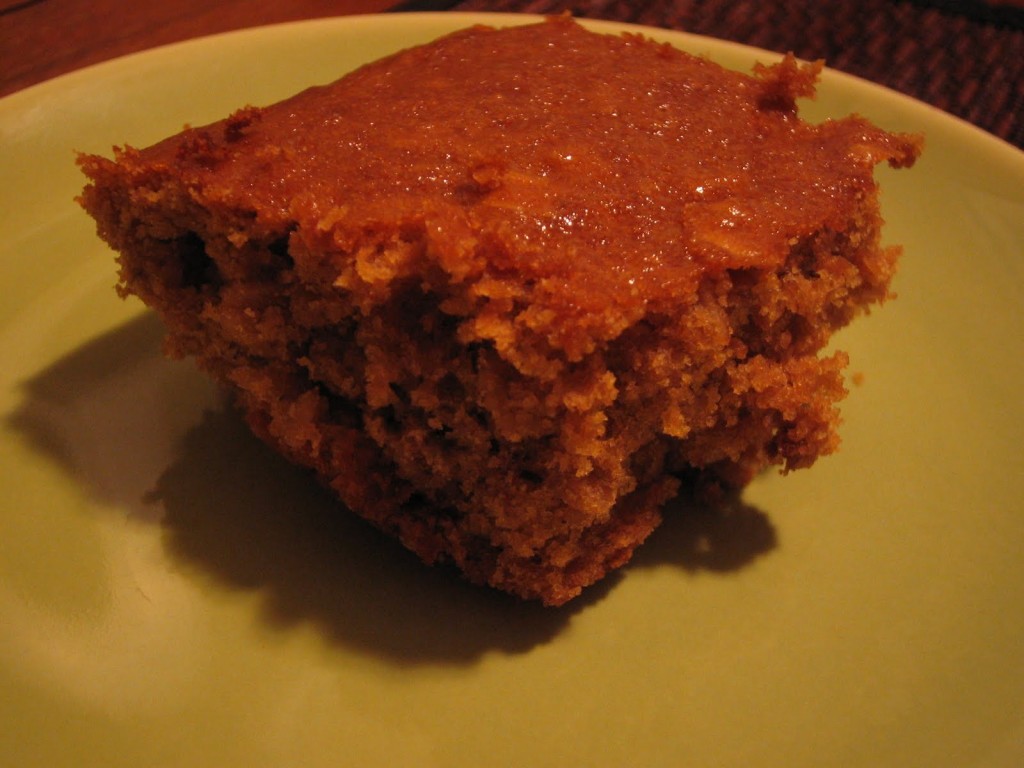 3 oz. (85g) golden syrup
1 oz. (28g) black treacle
3 oz. (1/2 cup, packed) (85g) light brown sugar
1/4 lb (100g) unsalted butter
5 oz. (1 1/4 cups) (140g) all-purpose flour / plain flour
1 1/2 teaspoons baking powder
1/2 teaspoon salt
5 oz. (1 1/2 cups) (150g) “old-fashioned” rolled oats
2 teaspoons ground ginger
1/2 cup milk
1 egg
1/2 teaspoon baking soda / bicarbonate of soda
Preheat oven to 350˚F / 180˚C / Gas Mark 4. Place a small saucepan on a kitchen scale and pour in golden syrup and treacle. Put the pan over low heat and stir in the brown sugar and butter.
While the butter melts, combine the flour, baking powder, salt, oats, and ginger in a large mixing bowl. When the butter has melted (mixture will look like Gloppy the Molasses Monster from Candy Land), pour the mixture over the dry ingredients and combine with a spatula.
Add the milk, egg and baking soda and stir until incorporated. Pour batter into a greased 9″x13″ (23cm x 33cm) pan and bake in the middle of the oven for 20 to 30 minutes, or until a cake tester inserted in the middle of the cake comes out clean. Cool in the pan on a rack and then cut into 18 squares.
Cake can be left in an airtight container to “mature” for a few days (or you can just go ahead and eat it). Parkin can also be frozen.
Recipe adapted from British Cookery by Jane Grigson.
Print