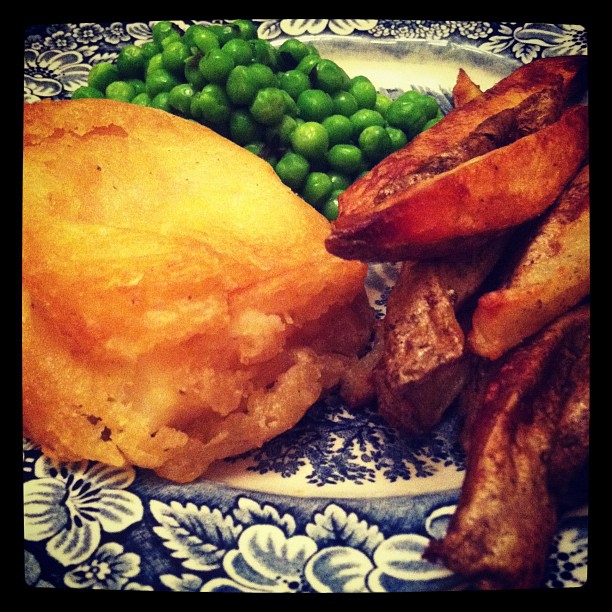 I felt another happy moment of nostalgia, sitting on the whitewashed harbor wall enjoying fish and chips that had been wrapped in newspaper, the old way I remembered it. The rest was well remembered too: the biting tang of vinegar, the sharpness of the salt, the sound of seagulls wheeling greedily above me while the water lapped the wall below and, farther off, the waves that crashed in rhythm at the entrance to the harbor and cast up a spray that carried on the breeze to cool my skin.
-Susanna Kearsley, The Rose Garden

Eating fish and chips has a definite element of nostalgia for me, too. It’s really rather a strange dish to be so intimately linked to my Oklahoma childhood, but my great-grandparents used to take me to Captain D’s. It was a regular feature of staying at their house, along with Lawrence Welk, going to the library, playing with 70s typewriters and 8-track players, and getting lost in the 60s and 70s editions of children’s books that had been my mom’s and her cousin’s. One of those books was an edition of Treasure Island with awesome midcentury full-color illustrations. Treasure Island, along with the Folk and Fairy Tales volume of the Childcraft Library (“Tom Tit Tot” was my favorite), was a book I returned to again and again and the nautically-themed décor of Captain D’s with its bow windows, lanterns, and ship’s wheels reminded me of Jim Hawkins’s adventures aboard the Hispaniola. I could eat my fish and chips and pretend I’d stowed away on a pirate ship, too. Since there aren’t any Captain D’s locations near me and I don’t eat things that have been fried in industrially-produced vegetable fats any more, I have to make my fish and chips at home. I found this awesome recipe because I was spending waaaay too much time on the AGA website. I’ve used duck fat because it’s amazing and I didn’t have any beef tallow. Feel free to use that or lard, if you prefer.

Preheat oven to 400˚ Fahrenheit (200˚ Celsius). Line a baking sheet with parchment paper and set aside.

Add two tablespoons of the duck fat to a 9” x13” (33 cm x 23 cm) baking dish. Place the dish in the oven to melt the fat. As soon as the fat is liquid, carefully remove the dish from the oven and toss prepared potatoes in the fat, seasoning with salt and pepper. Return baking dish to oven and cook for about40 minutes, or until cooked through and crispy on the outside. Toss the chips a few times during cooking to keep them from sticking.

Meanwhile, set aside two tablespoons of the flour for dredging. Season with salt and pepper. Make the batter by combining the remaining flour with the beer and more salt and pepper. Heat the remaining two tablespoons duck fat in a large skillet over medium high heat until fat is very hot (almost smoking). Fat should be at least ½” (1 cm) deep. Add more fat if necessary.

Dip the cod fillets in the seasoned flour, shake off excess, and then coat in batter. Cook on each side, turning when batter on underside bubbles (like making American pancakes). Remove fish to lined baking sheet. Bake 8 to 10 minutes, or until cod is just cooked through. Serve with chips and lemon wedges.

P.S. When I reviewed Susanna Kearsley’s The Rose Garden, I promised you a fish and chips recipe. You can read the book review here.

6 thoughts on “Fish and Chips”