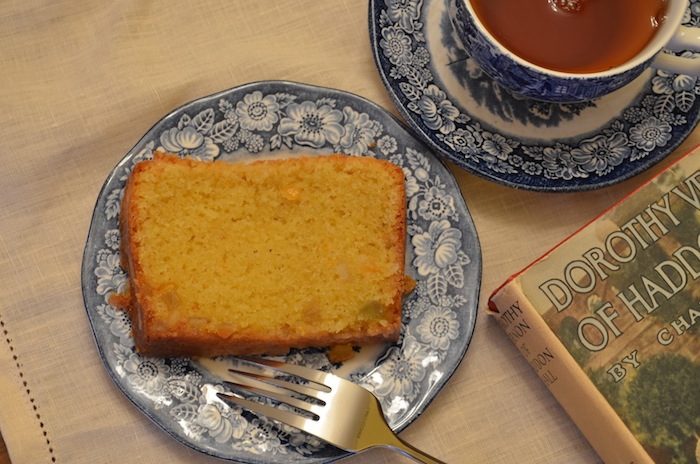 Oranges and lemons,
Say the bells of St Clement’s.
(from the 18th-century nursery rhyme)

I wanted to make something festive and seasonal but also practical. I had half a lemon and half an orange from making Christmas Pudding and they had to be put to use! What better than a lemon- and orange-flavored pound cake? It’s perfect for December since citrus is in season and a fresh, citrusy pound cake is a nice compliment to the heavier, spicy baked goods that show up at this time of year (like the aforementioned Christmas Pudding). St Clement’s Day is actually November 23rd, but I think it’s okay to make a St Clement’s Cake for the Christmas season because a) it’s really not too far off and b) the cake has nothing to do with the saint and all to do with the orange/lemon teaming (see the rhyme above). The combination of orange and lemon is associated with either St Clement Danes or St Clement Eastcheap, two London churches near wharves on the Thames where citrus fruits were unloaded. Another festive touch is the addition of candied citrus peel (which you can see at the bottom of the slice in the photo if you look closely) which just makes a rather plain cake that much more special. However, I do know that there are candied peel haters out there, so the peel is 100% optional. Leaving the peel out will make St Clement’s Cake acceptable to even the most vehement haters of all things fruitcake–a handy option for your Christmas spread. Without further ado, the recipe:

1/2 lb butter, very soft
1/2 lb sugar (I used half turbinado half granulated, but you could use all of one or the other)
1/2 lb eggs, weighed in their shells (about 4 large), at room temperature
1/2 lb self-raising flour*
1/2 lemon
1/2 orange
1/2 cup candied peel (optional)
1/3 cup granulated sugar, for the glaze

In a large mixing bowl, cream the butter and half pound of sugar then beat in the eggs one at a time. Stir in the flour in a few additions, combining well after each addition. Zest the lemon and orange into the batter and fold in along with the candied peel. Spoon batter into prepared tin and bake in the middle of the oven 45 to 50 minutes, or until a cake tester comes out clean. Cool in the tin for about 10 minutes before turning out on a wire rack to cool completely.

To make the glaze, juice the lemon and orange halves. Dissolve the 1/3 cup sugar in the citrus juice and brush over the top and sizes of the fully-cooled cake. Leave a few minutes to let the glaze set up before enjoying. Store in an airtight container.

I’m really happy to have the opportunity to share this with Visions of Sugarplums, my mom’s holiday blogging event. This is her third year and it just keeps getting bigger and bigger. What’s really great is that every time you comment on one of the participating blog posts (hint, hint), you’ll be entered to win an awesome prize. Be sure to check out the other participants:
Lori
Debbie
Maria
Mitra
Jane
May
Shelly
Ignacio