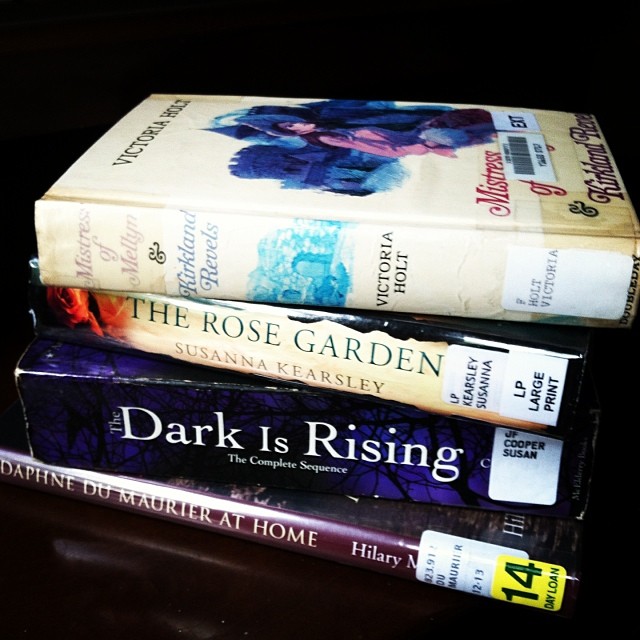 Imagine you are of two minds:

Mind 1: I should totally read Jane Eyre again. I’m in the mood for a gothic governess book.
Mind 2: But I’ve read Jane Eyre so many times. I want something different and familiar.

Enter Victoria Holt’s Mistress of Mellyn. Martha Leigh, a genteel woman who’s still young but has failed thus far to find a husband and has no money of her own, must head off to Cornwall to act as governess to willful little Alvean TreMellyn. Naturally, Mount Mellyn, where Alvean lives with her widowed father Connan, is full of secrets…and secret passages. We wouldn’t have it any other way. Of course, there’s a mystery surrounding the death of Connan’s young wife, Alice. She is suspected of having died in a train crash while running away with another man, but the body was too badly damaged for an absolute identification. Alice’s ghost might be haunting Mount Mellyn, though, so surely she died in that burnt-out carriage. Martha Leigh is too sensible to believe in ghosts and she’s determined to get to the bottom of things, especially since Connan TreMellyn is awfully attractive and who wants to fall in love with a murderer? Okay so the plot isn’t revolutionary and Mistress of Mellyn is quite melodramatic and is very obviously greatly inspired by the Brontë sisters.

However, I enjoyed it loads. Mistress of Mellyn is a solidly entertaining read and you’ll enjoy the setting (Cornish countryside!) and, if you’re like me, you’ll like all the tidbits about a traditional Cornish Christmas.

Oooh, almost forgot. There’s also an amoral former actress who has her claws in Connan, a neighbor who tries to seduce the upright Miss Leigh, an amusing housekeeper, and a kindly great aunt. And dances. And a horse show. What more do you need?! Seriously.

P.S. Victoria Holt is the nom de plume of Eleanor Hibbert, who wrote over two hundred books, not just as Victoria Holt but also as Jean Plaidy, Phillipa Carr, and various other pen names.

P.P.S. You can also read my reviews of The Rose Garden and Daphne du Maurier at Home.