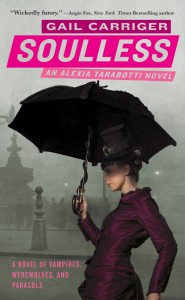 It may not surprise you to learn that I go to the library a lot–sometimes a few times each week, depending on how quickly I’ve been reading and if I’ve had any interlibrary loans or books from other branches come in. I believe in “use it or lose it” so I definitely put the library to use because it would be a terrible world without libraries. That being said, Paul and I also spend a lot of time in book shops. I hate paying for a novel in case I don’t like it, so I generally stick to the nonfiction aisles, but Paul likes owning his books, so I spend a considerable amount of time standing in the science fiction section while he decides what to read next. I generally don’t read a lot of science fiction/fantasy but have read a bit more of it recently. Is there anyone out there who hasn’t read at least one of the Game of Thrones books? Seriously. Those were actually some of the few books both Paul and I wanted to read. I can’t seem to shove Thackeray down Paul’s throat and I’m patently uninterested in Dune. We watched the miniseries and when they started wandering in the desert, I turned to Paul and asked, “How long are they going to be grotty and indigent?” He responded, “Pretty much the rest of the time.” Great. The wandering-in-the-desert was always where I got bored with The Ten Commandments and The Good, the Bad and the Ugly and I’ve never seen Lawrence of Arabia all the way through. Speaking of wandering, where was I? Ah, yes, the science fiction section of the used bookstore.
While Paul was deciding which dystopian series to start next, my eye wandered toward a boxed set of Gail Carriger’s Parasol Protectorate series. The blurb made it sound terribly amusing, but I wasn’t about to risk $15 on five unknown steampunk novels, so I made a note in my iPhone so I could check the library catalog when we got home. Success! I wasn’t even going to have to wait on an interlibrary loan. Three days later, I’d torn through Soulless, the first novel in the series. It was the ultimate guilty pleasure. I mean, I’m not going to show up at book club and announce I’ve been reading a vampire/werewolf/steampunk novel, am I?* Soulless, set in an alternate Victorian London with dirigibles and supernatural beings, was funny (laugh-out-loud in some places) and had some nicely suspenseful passages. The characters are a lot of fun, too: soulless spinster Alexia, Scottish werewolf bureaucrat Lord Maccon, extravagant and flamboyant vampire Lord Akeldama, fashion-victim Ivy, the trusty and put-upon Professor Lyall and Alexia’s excellent butler, Floote. Can’t wait to read the next one.
*Most definitely not, especially since I stopped going to book club. What is up with novels being depressing just for the sake of being direly dour? (And this question is coming from someone who actually enjoys Thomas Hardy novels.) Why did I put myself through A Tale for the Time Being? I didn’t enjoy spending $30 for the hardcover, either…
Photo credit